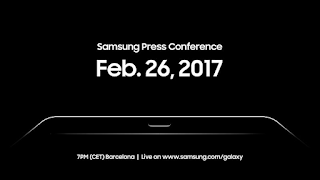 Samsung has confirmed its presence in MWC 2017 in Barcelona later in this month(February 26). Hints were showing its absence in this event as S8 would not be launched in MWC but instead  will be launched in late march or mid April.
So whats samsung launching in MWC this is year is rival to ipad, the galaxy tab S3. Samsung has officially made announcement with a teaser image which resembles like tab S3 with home button at bottom of the screen. The event will be held on February 26 at 7pm CET (11:30 pm IST) and will be live on www.samsung.com/galaxy
Galaxy tab S3 looks like its S2 and available in two variant based on screen size with 9.7 inch and 8 inch. The body is said to have full metal like the ipad and screen resolution support of 2048×1536 pixels.
S3 is powered by Snapdragon 820 SoC with 4gb of ram. S3 comes with nougat out of the box with some new UX. Price of the product is said to be $600.