Home apps SAMSUNG PAY LAUNCH IN INDIA
Share on Facebook
Tweet on Twitter
Demonetisation has definitely driven indian towards use of mobile wallets and other moblie payment methods. In November and December we saw an rapid increase in use of mobile wallets. Samsung pay,Android pay,Apple pay is another medium for transaction at merchant where your card which is saved in your mobile is used for transaction. 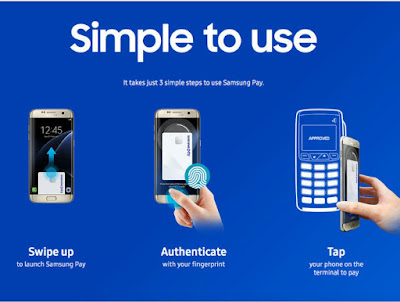 However none has come to india. These use NFC for transactions and in India there aren’t much machines which have NFC reader. But Samsung uses MST(Magnetic Secure Transaction) along with NFC which can be used in normal machines like usual swiping of card. But you need to place the phone 1/2 inch above the magnetic strip reader. So this feature may be boon to indian users where there are not enough readers with NFC. This feature makes strong contender against other payment apps.
According to the report in sammobiles, Samsung is going to launch Samsung pay in India in first half of 2017 and samsung is currently testing in india. But there is no official statement given by Samsung, or the RBI as they need yo connect to banks in the country. If these rumour is true we may see a revolutionary change in indian payment system. At the time of launchig S8 is the right time to introduce it in india.

How to join for beta app testing in Android