Every one in this generation owns or wants a smartwatch.why not it has various benefits and features

which helps u to do the work within reach of their wrist.Market for smartwatches is tremendously increasing. Most of the handset manufacturers like Samsung,Apple,Sony,Huawei, Lenovo, Intex have started making smartwatches with various series. Samsung has given smartwatches a new way of look by introducing gear series. 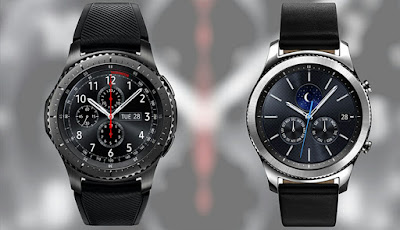 Samsung has finally  lauched its Gear S3 and is available in all samsung stores and priced at Rs 28,500. The shipping o this product will be from January 9.  Samsung has released Gear s3 in year 2016 at IFA. Gear S3 is available in two variant called Frontier a outdoor watch and Classic a luxurious watch to match your style. Gear S3 will give a health competition to Apple watch series2. It has made gear watches and gear fit compatible with iOS devices which can be accessed by downloading app from app store.

Samsung Gear S3 run on samsung’s own Tizen and comes with a 1.3 inch super AMOLED circular
display of 360×360 pixels(278pixel density) with gorilla glass SR+ protection at top. Rotating bezel
is back as seen on grevious gear S2 with various uses like adjusting the volume,answering calls,playing games etc. Always on display is addes which enables to view notifiations without touching the screen or bezel. It is powered bu 1GHz dual core processor with 768mb ram and 4gb of internal storage so now you can enjoy music from your watch with pairing and without carrying  your heavy phone.

Gear s3 comes with a 380mAh of battery which last upto 4 days. Other features include wireless charging,gps,built in barometer,spedometer,pedometer,heartratesensor,Bluetooth v4.2, wifi,SOS. SOS option can be used by tapping the screen three times and your message along with location is sent to your registered number. It has IP68 certification which means it is water as well as dust proof. It has NFC&MST embeded into it for mobile payment through samsung pay.The frontier model has cellular radio chip that allow to connect to 4G/LTE networks without tethering.