Home mobiles SAMSUNG GALAXY S8 RUMOURS SO FAR..
Share on Facebook
Tweet on Twitter
Samsung is definitely the one who seeks innovation in its device. But packing up more than required doesn’t make you pretty forward in market,Note7 was such an devastating incident which samsung had to face in 2016. On other hand S7 stood as the best phone of 2016. Samsung tried to compete with iphone7  thus packed some awsome features and gave to have a healty competition but unfortunately it dint took place and they eventually had to call it back.
The S series of samsung shows class,stlye and specs in one device. They were the first to introduce dual curve edge display in galaxy S6 edge. Iam currently using S6 and
hopefully waiting samsung to introduce S8 with some great innovation and ideas but taking its own time to test before releasing,
Here are some rumours and news. 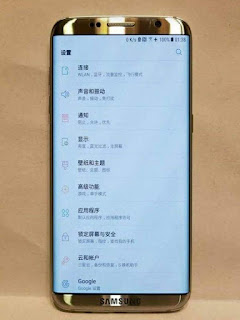 Samsung its taking its design a step further by making s8 bezel less. Earlier we saw bezel less display in Xiomi mi max. S8 is rumored
to have 90% or even greater screen to body
ratio. Recently there was leak image of a Samsung

device preferably S8. We can see the the curved bezel less screen and absense of home button. Samsumg is currently sticking to 2k screen which was said to have 4k earlier.

Yes, you heard it right samsung is currently removing its home button from screen which it was famous for. But what about finger print scanner will samsung remove that to?
Definitely not but it may embed  scanner within the screen. This seems true because synaptics announced that they had developed a new fingerprint scanner-The natural IDFS9100 optical Fingerprint scanner
It can scan through 1mm of fully covered glass. This may be good as scratches will not
effect the scanner which we faced in s6 and s7.

Samsung is going in the direction of iphone by removing headphone jack, instead it will have usb-c connector for charging and audio
output. These may be sad news for some
users but we must change according to the development and may be after couple of years all phone may not have headphone jack. Removing this may give space for battery and speakers. Talking about spearkers samsung may have stereo speakers  by Harman kardon with great loudnoise and
clarity.

S8 is rumored to have dual lens camera which will be there in either of two models. But personally i don’t think so samsung would do as their camera is outstanding, but
lets see what it comes with. Front camera is said to have 8mp along with auto focus, this helps to take sharp and bright selfies.

Samsung recenty took viv labs. This is the same who crated siri earlier. Samsung is removing its samsung voice which was a total fail. S8 is said to have an AI naming Bixby which gives competition to already ruling Google AI. Bixby could book tickets and ride you a cab as well. Bixby is tend to be smarter than existing AI as of now.

Samsung s8 is rumored to come with Qualcomm Snapdragon 835, some even claim it to come with samsung’s own Exynos 9995
It may have 8gb of ram or 6gb according to
different sources. Force touch or pressure sensitivity as seen in iphone may come to s8.
Iris scanner and security folder seen on Note
7 will come to s8. Always on display is also in s8.

Samsung may discontinue note series but most remarkable thing about it was it’s stylus the S-pen. It is rumored to come with it in other variant called S plus. This may also lead to removal of flat version of s8.
If any dual lens camera is to come, S plus may feature it. What do you think about it?
May your thought flow in comment section.

Samsung galaxy is expected to launch at MWC this year but may be postponed to April 8.However their is no pricing details but a rise about 10-15% of that of S7’s may be expected.